The following is part of an article collection written by either our outfitter, guides, or past clients. Many of these articles have appeared in magazine periodicals.

My Twenty-one Year Quest for a Tag Paid Off 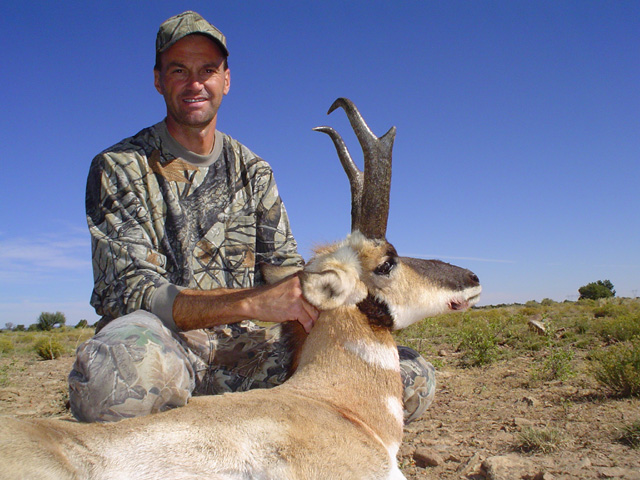 Many hunters are drawn within a few years of applying for Arizona antelope, but some are unfortunate, as I have been. It took 21 years for me to get my first tag for Antelope in Arizona! I felt comfortable that I could get a buck, but knowing that this might be a once in a lifetime hunt, I wanted some reassurance that I would get a respectable specimen. For that reason I searched through a variety of outfitters and made a few phone calls before opting to go with Pat Feldt from Arizona Guided Hunts.

Pat scouted the area the weekend prior to the hunt and found a nice buck. But, when we arrived the day before the hunt we found other camps in our area. We did some quick scouting the evening before the hunt, but could not find our buck. That didn’t surprise me; idiots driving quads around the middle of an Antelope herd would scare me too.

The next morning we searched again for our buck, but he was long gone.We passed on a respectable buck and went searching in other areas.We hunted hard that first day, and counted a total of 10 desperation day bucks that we would save till the end.

On the second morning, we moved our search again. We drove into a great area and hiked to the top of a large hill that afforded good viewing for miles in all directions.We saw a lot of Antelope (desperation bucks 11 through 13) and after an eternity finally spotted what appeared to be a dandy buck at a distance of nearly two miles.He was standing alone under a shade tree, apparently thinking of bedding down.Now, let me tell you, 2 miles is a long ways and with my binoculars it was hard to tell it was even an Antelope, let alone a buck. But, Pat used his Leupold spotting scope and said that this buck was what we were looking for. So we loaded up the gear and off we went in pursuit.

Getting to him was not easy. Not only was the terrain fairly rough, but there were cattle everywhere and we were concerned that the cattle would clue the buck in to our presence. Pat was almost running the whole time with me dragging slightly behind. Cattle would spook from our presence every so often, which made us concerned.After closing the distance to within 750 yards we looked and to our amazement saw that the buck was still there under the same tree! We edged about 150 yards closer, which was about as close as we were going to get without spooking the cattle into the buck. The ground between us was now open and flat with few trees. Pat then decided to set up for a shot because it might be the only chance on this buck.

Though I had brought my own rifle to hunt with, I had never shot beyond 300 yards before. Pat suggested that I use his 300 Remington Ultra Mag with the 6.5-20X Leupold, and I was glad I had taken him up on the offer. I lay out across several rocks and Pat helped me adjust for the shot. The bipod and rear rest were adjusted so the gun was rock solid. The minutes of angle were clicked on the turrets of the scope according to the distance. Unfortunately, after setting up, we found that the Antelope was facing away from us. We had to wait for what seemed like an eternity for a broadside shot. I must have lain on those rocks exposed to the sun for 45 minutes waiting for him to turn. Pat was behind me. I think he was in the shade enjoying a cool drink. He chuckled as he asked me if I was hot out in the sun. Finally it happened! The buck turned broadside and I squeezed off the shot. The buck was obviously hit, but we lost sight of him as he passed behind a juniper tree. We waited for a short time before going to investigate. During this time I put the Leica range finder on Pat’s tripod and measured the shot distance at 606 yards! Pat said he rarely has hunters that can shoot much further than a couple hundred yards. This was a one shot kill at an incredible distance.

We found the buck dead about twenty yards away from the point of impact. It was a perfect one-shot kill through the heart (thank you Pat for the use of that awesome rifle). Pat caped him for me and he is now at a taxidermist waiting to be mounted. Pat said I got cheated a little on the scoring because he had smaller prongs than most bucks of such great horn length, but he still scored well. He is a very respectable buck and definitely worthy of a mount.

Thanks to Pat, he did an excellent job. I will NEVER forget that shot. 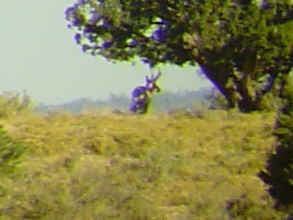 This is a photo of the buck as he stood for 45 minutes while we waited to shoot.