About Our Arizona Gould's Turkey Hunts 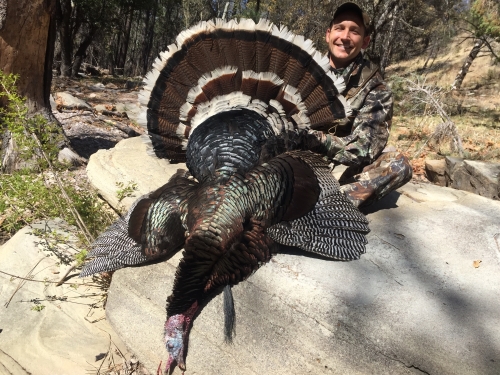 We are pleased to offer hunting trips in southern Arizona for the rare Gould's turkey. The Gould's turkey is primarily a mountain dwelling bird that inhabits the extreme southern portions of Arizona in higher altitude areas known as "Sky Islands" (forested mountaintops that rise above the vast sea of desert). The Gould's sub-species is geographically separated from the northern Arizona Merriam's by hundreds of square miles of surrounding desert. Therefore, the chance for hybridization is slim to none. The Gould's is the largest of the turkey subspecies with longer legs, larger feet, and larger tail feathers and wings than all the other subspecies. They also have a higher level of iridescence to their feathers.  But, the most notable difference from the other turkey subspecies is that the Gould's turkey typically has whiter tips on the rump and tail feathers (Merriam's have a cream-white).

The Gould's turkeys that we hunt live in a natural habitat with no food plots, no farm fields, no feeders and typically no other human influence. Since Gould's are mountain dwelling turkeys, our hunting takes place in the Oak Woodlands to Ponderosa Pine forests at elevations of 6000 to 8000 feet. This high altitude hunt area has breathtaking scenery with very enjoyable Springtime temperatures of around 80 degrees in the day and 45 degrees at night. In order to eliminate over-harvest, Arizona Gould's Turkey tags are on a special random lottery draw through the Arizona Game and Fish Department.  If interested in booking a hunt with us, contact the outfitter on how to apply and which hunt numbers to use. Once a tag is drawn for our recommended area, we can then book the hunt.

These are nearly all-inclusive fully-guided turkey hunts. Hunters are led into the field daily by an experienced turkey guide in order to provide the highest chances for tagging a bird. Most seasons have ended with 100% success and all seasons have ended with 100% opportunity! Our guides are very familiar with the area, terrain, where the birds hang-out, and more importantly, the techniques needed to effectively hunt Gould's turkeys. Since southern Arizona is such a vast and dry environment, Gould's turkeys tend to have a very large home range and are more spread-out than other turkey species. Gould's turkeys live in the mountains in their natural habitat setting.  In order to increase odds for success, hunters should be prepared to hike away from the road and into the quality Gould's turkey habitat.  Hunting for Gould's turkey typically requires hiking from ½ mile to 2 miles from the end of the road, depending upon where the birds are hanging at the time of your hunt. Like Spring turkey hunting anywhere, there are many tactics to use while hunting these mountain birds. Since they are so spread out, we primarily walk large ridges and set-up when we strike a gobbler. We also set-up in known corridor areas and "cold call" in blinds or against oak and pine trees to see if a weary gobbler will come to investigate. Calling birds off the roost in the early morning can sometimes be effective if the gobblers aren't henned-up. Our guides will typically call for the hunters, but experienced turkey hunters can join-in with calling, whichever is preferred. If you need your Gould's turkey for the Royal Slam and want to stay within the United States, we have the Gould's hunt for you!

Arizona Gould's Turkey hunting is on a random lottery draw through the Arizona Game and Fish Department.  Hunters that are interested in booking a hunt with us can be emailed general instructions on how to apply and which hunt numbers we recommend. The online draw application period for Spring Turkey is late September through early October. If you apply and are lucky enough to draw a tag, we would then book the hunt. As with any lottery draw, persistance is the key. Some hunters are lucky and draw after only 1 or 2 tries, while most are not so lucky and take several years to draw. You never know when you will be drawn, but you can build bonus points to increase your odds. Each time you apply and are not drawn, you receive a bonus point.  An additional turkey bonus point can also be obtained in late May instead of applying for fall season Merriam's turkey.  Therefore, 2 turkey points can be accumulated per year.  For each turkey point you have, you get an additional entry into the draw, thus increasing your odds over time. Contact the Outfitter so he can point you in the right direction on how to apply for the draw.

Note: The State requires everyone to have a nonrefundable hunting license in order to apply in the draw.  The turkey permit-tag fee will only be charged if you are drawn.

Arizona Spring Gould's Turkey Seasons for 2023 are May 5 through May 25.  Hunters are drawn for a certain week within a given area.

Arizona Bag Limit: The Arizona bag limit is ONE turkey per year, either a Merriam's or a Gould's.

The price for a guided 1-on-1, up to *3 days, southern Arizona Gould's turkey hunt:

Non-Hunter Fee: Some hunters like to bring along a buddy to camp and share the experience while they hunt. There might be an option to invite one person as a non-hunter or observer while on your guided turkey hunt.  Non-hunter space is very limited.  Based upon availability.  Turkey Hunt Non-Hunter Fee: $800.00

* Arrive to camp the day prior to hunting.  Depart camp about noon on the last day of hunting.  Hunters depart sooner if they tag out early. So, it's best if flying non-resident hunters arrive in Arizona the evening prior to meeting us (two days before hunting), rent an SUV from the airport, get a hotel room and we will meet the next day about noon in the hunt area about 2 hours from the Tucson Airport or 4 hours from the Phoenix Airport.  These are the closest major airports. Flying hunters will meet near the hunt area and can follow us to camp with their rental vehicle.  Flights should be scheduled to depart the morning after the hunt.  More details on the general info page.

BOOKING INFO: The first step is to contact the outfitter to get on the list for a possible turkey hunt.  In September he will point you in the right direction with applying for tags and licenses. Once a turkey permit-tag is drawn for our preferred area, hunters will book the hunt by signing a contract and submitting a 50% non-refundable deposit. The remaining balance is due at least 21 days prior to the hunt. We recommend cancellation insurance for all of our guests. Visit our policy page for more details.

Other Costs and Considerations that are the hunter's responsibility: licenses and tags, transporting yourself to/from the camp, optional vehicle rental, optional taxidermy, transporting your animal home, airport hotel stay before/after the hunt (if flying).  Gratuity for your guide is gladly accepted and customary (15% is typical). Accommodations: Our complimentary accommodations are basic southwestern style outfitter tent camps which are often located many miles from civilization. Sleeping quarters for turkey hunts are typically in deluxe outfitter tents, unless noted otherwise.  If you are looking for a hunt with fancy lodges, this is NOT the hunt for you!  Tent camps are used because Gould's turkeys live in remote areas.  The deluxe tents consist of large outfitter Kodiak Canvas brand tents.  The size of our tents are tall and spacious inside; typically 10X10 or 10X14 and stand 6.5 feet tall. Cots with thick pads are provided, but all hunters must bring their own sleeping bags. For those that own a camping trailer and would like to bring it to camp to stay in are more than welcome to do so, but we cannot discount the hunt any. It must be very short and high enough for ground clearance on rough, rocky dirt roads. Please ask for road conditions before bringing one.   Video of our typical camp. 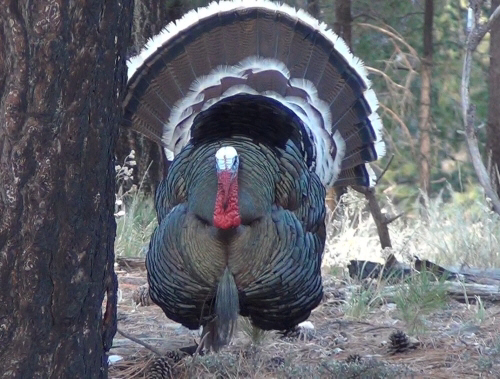 WEAPONS: It is Arizona law that only shotguns, crossbows, or bows be used for turkey.

Shotguns: We recommend shotguns to be chambered in 12 gauge 3" or 3-1/2" magnum. But, a 20 gauge 3" magnum will also do the job with the proper load/choke combo (like Indian Creek tube with TSS).  The best turkey shells we have found are loads with Tungsten shot, such as Hevi-shot, Federal TSS or Apex TSS.  If you prefer lead, Winchester Long Beard XR #5 shot produces good long-range results. Chokes should always be "turkey choke tubes" in order to produce the tightest and most uniform patterns possible for your particular gun.  Indian Creek brand turkey choke tubes have proven to produce superior patterns.  A turkey choke tube paired with either Hevi-shot, Federal TSS, Apex TSS, or Winchester Long Beard XR produces excellent long range results, if the need arises!

About the Outfitter: Pat Feldt earned a Bachelor of Science in Renewable Natural Resources with a major in Wildlife Management from the University of Arizona, which adds to his credibility as a full-time outfitter.  Even though he is a big game guide throughout the year, his true passion is turkey hunting. He is a 52 year-old turkey hunting fanatic who has been pursuing wild turkeys his whole lifetime. Whether scouting or guiding Merriam's hunters, Gould's hunters, or hunting for himself or with friends and family, he typically persues turkeys nearly everyday of the Spring turkey season (about 5 weeks straight)!  Pat is very experienced in all calling methods and you'll see him using most types of calls while on the hunt. But, he prefers to use raspy mouth diaphragms coupled with friction pot calls. Pat is also a firm believer in the use of decoys to aid in enticing a gobbler (if given ample time to set one up). He has taken dozens of native mountain Merriam's gobblers himself and has taken all the subspecies in the Grand Slam, as well as completed the US Royal Slam. His Gould's turkeys were taken within Arizona.  See some of Pat's personal turkey harvests. 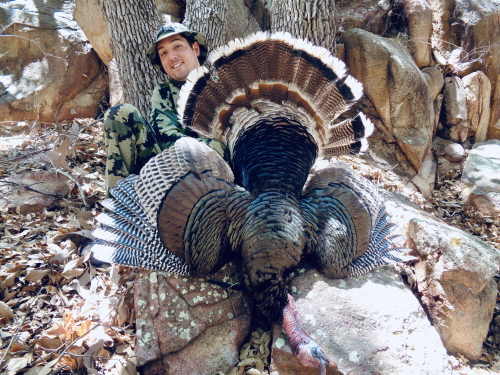 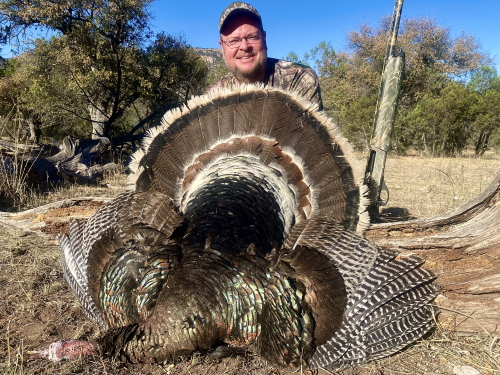 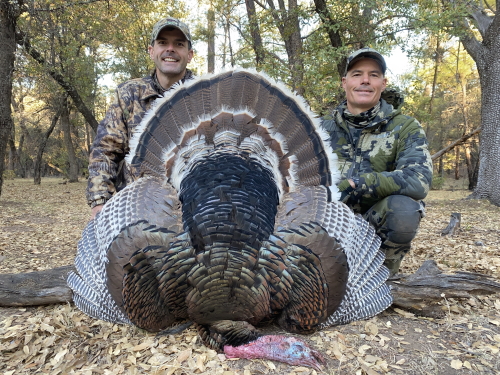 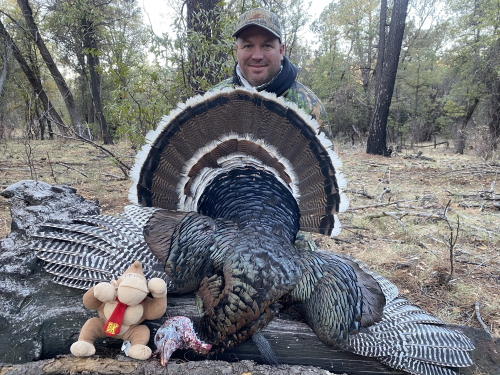 Dan from OH finished his US Royal Slam on this big southern Arizona Gould's turkey.  Video of Hunt 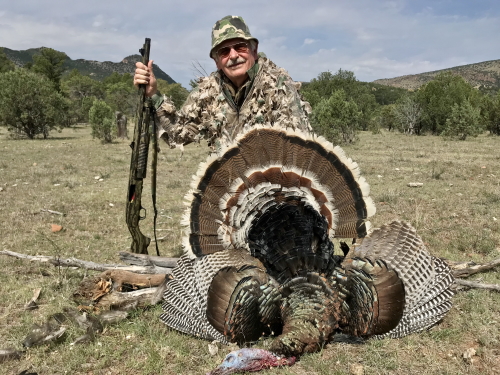 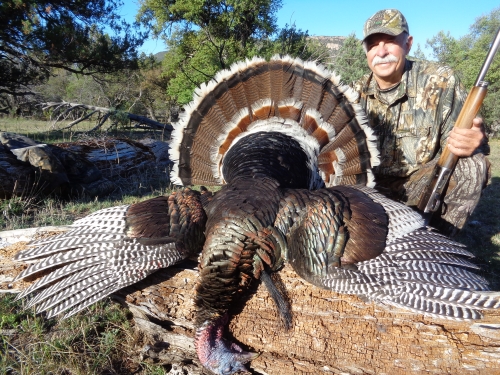 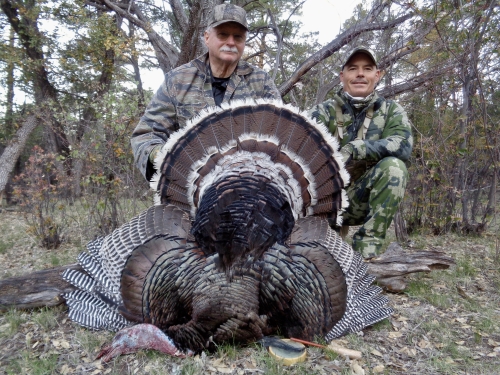 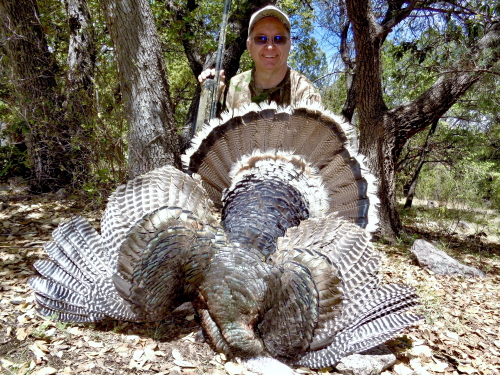 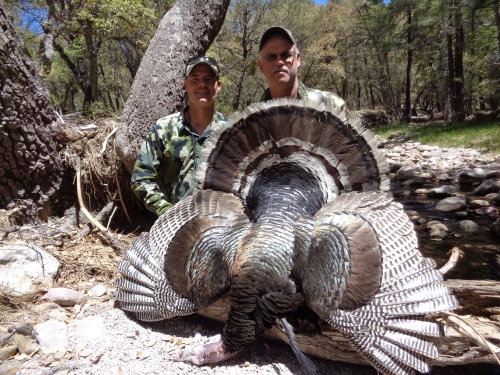 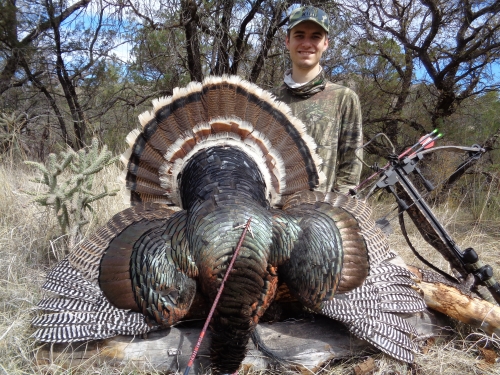 Michael shot his Arizona Gould's turkey with a crossbow at 20 yards! 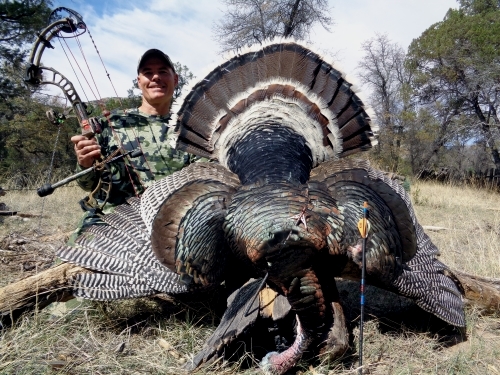 Pat Feldt with his archery Arizona Gould's turkey taken at 2 yards - NO Blind! 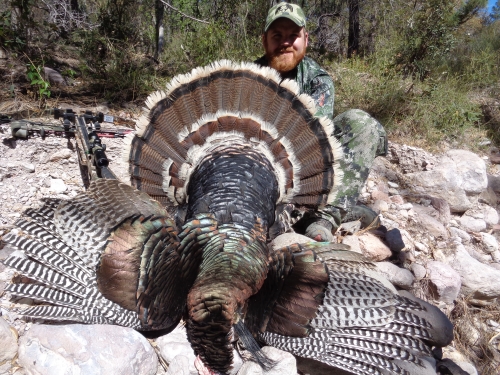 Mike from Virginia shot this big Arizona Gould's turkey at only 7 yards with a crossbow!

Joe shot this big Arizona Gould's turkey with his bow without a blind! 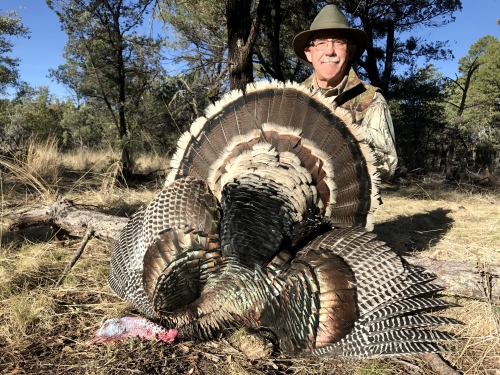 Contact the outfitter at arizonagh@aol.com to start the process of booking a guided Arizona Gould's turkey hunt.